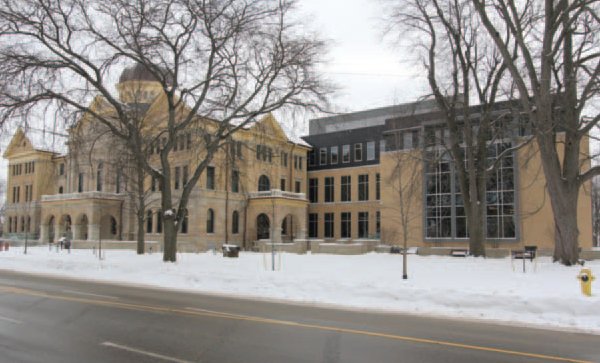 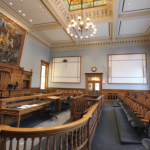 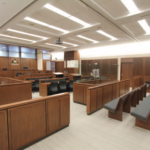 The $250 million Elgin County Courthouse in St. Thomas, Ontario has opened. NORR designed the three-storey building in close collaboration with heritage architects Fournier Gersovitz Moss Drolet et Associés Architectes (FGMDA). EllisDon operated as general ontactor for the project. The Infrastructure Ontario public-private partnership project PPP), he first of its kind for a heritage renovation, includes design, construction, financing and maintenance. Construction began in June 2011 on the site of the historic Elgin County courthouse, originally built in 1853. The work consolidated the Superior Court of Justice and Ontario Court of Justice, formerly in separate locations, to modernize the courthouse and provide better accessibility. The building has eight courtrooms and three conference settlement rooms. A heritage courtroom has been maintained from the original building. The north and west elevations, dome and copper roof and masonry and sculptural detailing from the original structure have also been conserved and restored. A modern addition connects the heritage courthouse and a former Land Registry Office which has also been refurbished. The addition adds 135,000 sq. ft. of new space. David Clusiau, NORR’s senior principal, architectural design, says the challenges in maintaining and incorporating the old with the new were numerous but worth the effort. “We had to insert modern mechanical systems and technology into the heritage building in as invisible and unobtrusive a manner as possible,” he said. “We also needed to bring the heritage building up to standard with regard to new security processes and accessibility requirements.” The design also needed to accommodate the different circulation/access requirements for the public, accused, and judicial officials. Clusiau said the design team created an addition to enhance the original buildings, supporting and complimenting heritage elements, while meeting LEED Silver standards. He says the design has achieved all of these goals in a way that is interesting and engaging. “Aside from the public atrium at the heart of the new addition and the associated public circulation system that provides views out to the surrounding landscape and adjacent heritage courthouse, one of the interesting elements of the projects is the inclusion of a programme of heritage plaques around the site,” he said. “The multiple storey one in the main atrium as well as the display case of historical artifacts that all add another layer of interest onto the already architectural layered site.” The design needed to be flexible, as the project will serve the community for at least three decades. Clusiau says this has been achieved through the addition of two additional courtrooms on the third floor and adaptations to the existing courtrooms. “We made modifications to the millwork, creating a two-sided crest that can be flipped for use by either the Ontario or Superior Court as needed.” Sight N Sound Design, a design build audio visual consultant, installed the audio visual systems, including evidence presentation, voice enhancement, audio recording, video conferencing, remote testimony facilities, and control systems. Sight N Sound president Ken Lewis says his company specializes in complex projects. Before this project, they were also involved with the Waterloo Courthouse and the Quinte Courthouse. “One element that is unique to these courthouses is the integration of legacy video and the new digital format into courtroom evidence presentation system,” he said. “Essentially that means lawyers have the capability to use any known video support material, which supports the ministry’s spirit of providing optimal services for every person’s right to a fair trial.” All of the systems needed to be tested for consistent quality sound with a 100-hour burn-in phase. “If something is going to fail it will generally happen in the first 70 to 100 hours so we let it settle and then retest to make sure everything is still functioning as it should,” Lewis said. “Everything we installed is state-of-the art but each component was designed as the technical solution for a particular situation. Every capability meets a judicial need so it is all very efficient.” Lewis says in this case the heritage courtroom posed unique challenges. “We had to integrate the same technology into this courtroom but into the existing furniture and walls instead of using purpose-built furniture as in the case of the other courtrooms.” He says connectivity has been integrated into a newly constructed wall that resembles the original woodwork. The millwork contractor also drilled up and through existing spindles where possible to hide wiring. Lewis says this kind of solution, part of collaboration in which consideration is given to each consultant or subtrade and their particular area of expertise, is the only way such projects succeed. Now that the courthouse has opened Sight N Sound Design’s role changes, but the audio-visual experts will remain on site, reflecting the ongoing commitments in P3 projects. “We’ll do training with all of the staff and more extensive training with key people,” says Lewis. “We will also take on a role of technical support to facilities management. If they don’t know how to do something, need more training or experience a problem, we will be there for the next 30 years to lend our support.” Lewis says his company has learned a lot about the judicial process and system through their work on these courthouse projects spanning more than a quarter of a century. They continue to observe the needs and changes that occur over time, will take away lessons learned, and gain an even greater understanding of this kind of project. Clusiau says this is first heritage renovation and addition courthouse delivered through the Infrastructure Ontario PPP process. “This process has been used primarily for new buildings and is the primary funding mechanism for such large projects. It is a significant milestone that this project was able to be successfully delivered through this method and hopefully will encourage other projects of this type that retain valuable components of Ontario’s built heritage.