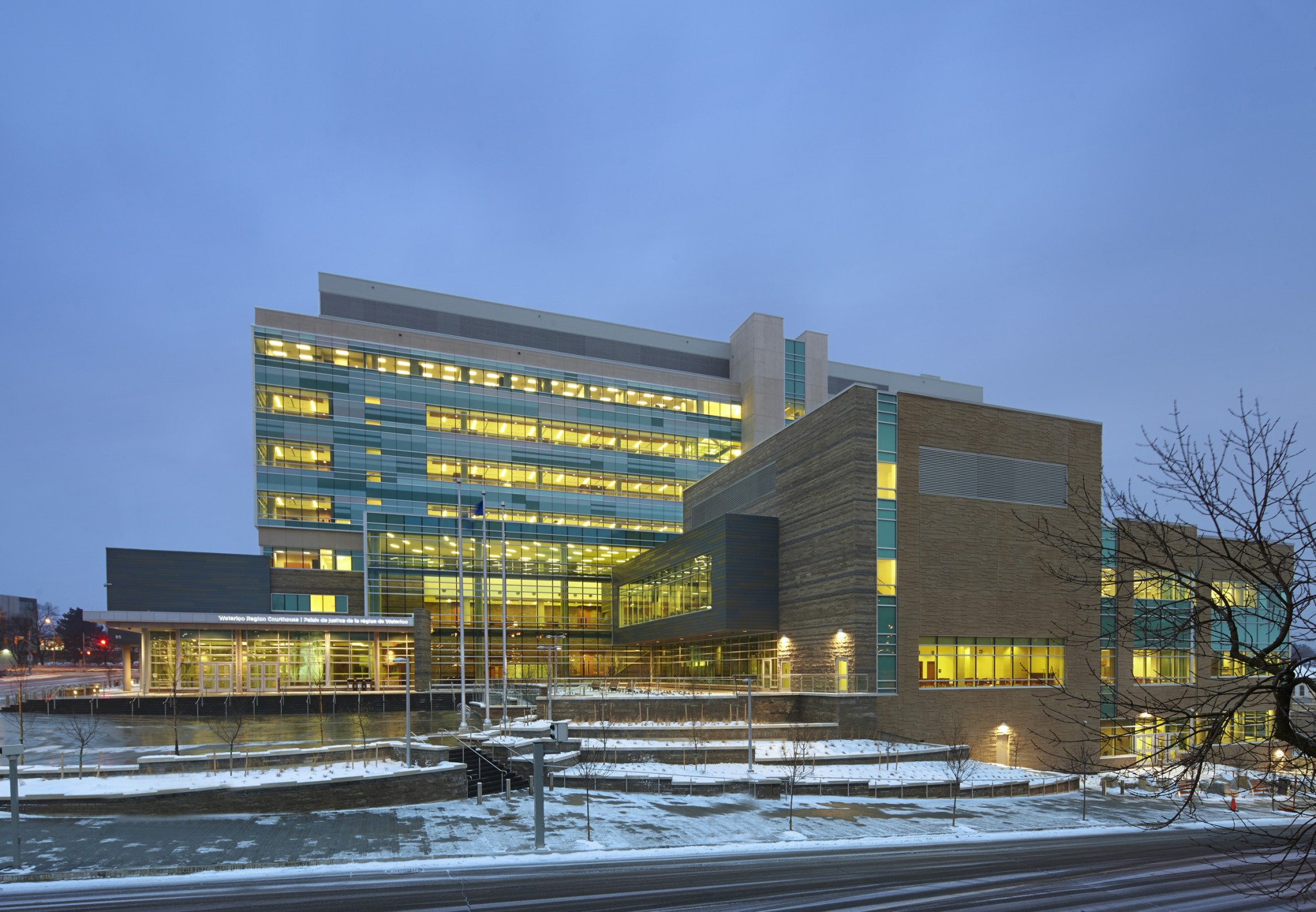 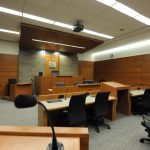 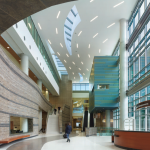 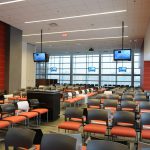 The new 430,000 sq. ft., $379 million Waterloo Region Consolidated Courthouse is one of five projects in a provincial initiative to create a modern, effective and accessible justice system. Construction commenced in March 2010 and is expected to be completed in the spring of 2013. The project is expected to rejuvenate a section of downtown Kitchener. NORR Architects’ project manager Bob Kushnir says the courthouse will include 30 courtrooms plus a variety of other spaces for the judiciary, court staff, Crown, legal aid, probation and parole officers as well as other public services. “There is a ceremonial court and a multiple accused high security courtroom with additional layers of security,” he said. Kushnir described how numerous consultations with stakeholders about the function of spaces which helped sort out the project, in the refinement of functional spaces, and of interweaving the separate travel paths for different user groups who each have their own levels of security, access and purposes within the building. (Courthouse buildings have special challenges –for example prisoners in custody, judges and public each have their own circulation system and they cannot intersect each other.) Although each of the five court buildings contracted through Infrastructure Ontario meets many consistent standards, each region defines its own uses for spaces and approaches to problems and efficiencies so each building is designed to meet individual local needs. In Waterloo, NORR design principal David Clusiau established the initial design, which was then fulfilled by senior designer Joe Moro. “The design conceptually relates to the natural features of the Grand River Valley,” Kushnir said. “To reflect this, the courthouse has very horizontallyoriented architectual components presented through the stonework and windows. There are striations of pattern in the precast panels, and window patterning. These are complemented by curvalinear floor patterns which mimic water courses.” The three-storey glass atrium provides a clear, logical orientation for the visitor without need for excess signage and the landscaping of the main entry civic plaza across from the cenotaph will make the building a dignified, welcoming and well-used space. The new courthouse, located at the north-east corners of Frederick and Duke Streets in Kitchener, seamlessly adapts itself to the site’s challenging six-metre drop from corner to corner, while simultaneously using the change in elevation to separate program areas within the building itself. The site design of the Waterloo courthouse was done in collaboration with the City of Kitchener and the Region of Waterloo to create a project that would both rejuvenate the downtown and serve as a precedent for urban sidewalk design. The building is designed with energy and water conservation in mind and is expected to achieve LEED Silver certification. Sight N Sound Design, a design-build audio visual consultant, has responsibility for audio visual systems including evidence presentation, voice enhancement, audio recording, video conferencing, remote testimony facilities, control systems and audio-visual infrastructure. SnS president Ken Lewis says his company specializes in complex projects. “One element that is unique to this courthouse is that it is one of the first to integrate legacy video and the new digital format,” he said. “Essentially that means lawyers have the capability to use any known video support which supports the ministry’s spirit of providing the optimal services for every person’s right to a fair trial.” Lewis says the design and mock up phases of the work have been completed and his consultants are now working with the electrical contractor on the best way to integrate the technology into the building. “The new design and the efforts of everyone involved is all about doing the best job of ensuring the court can serve the needs it is there for.”