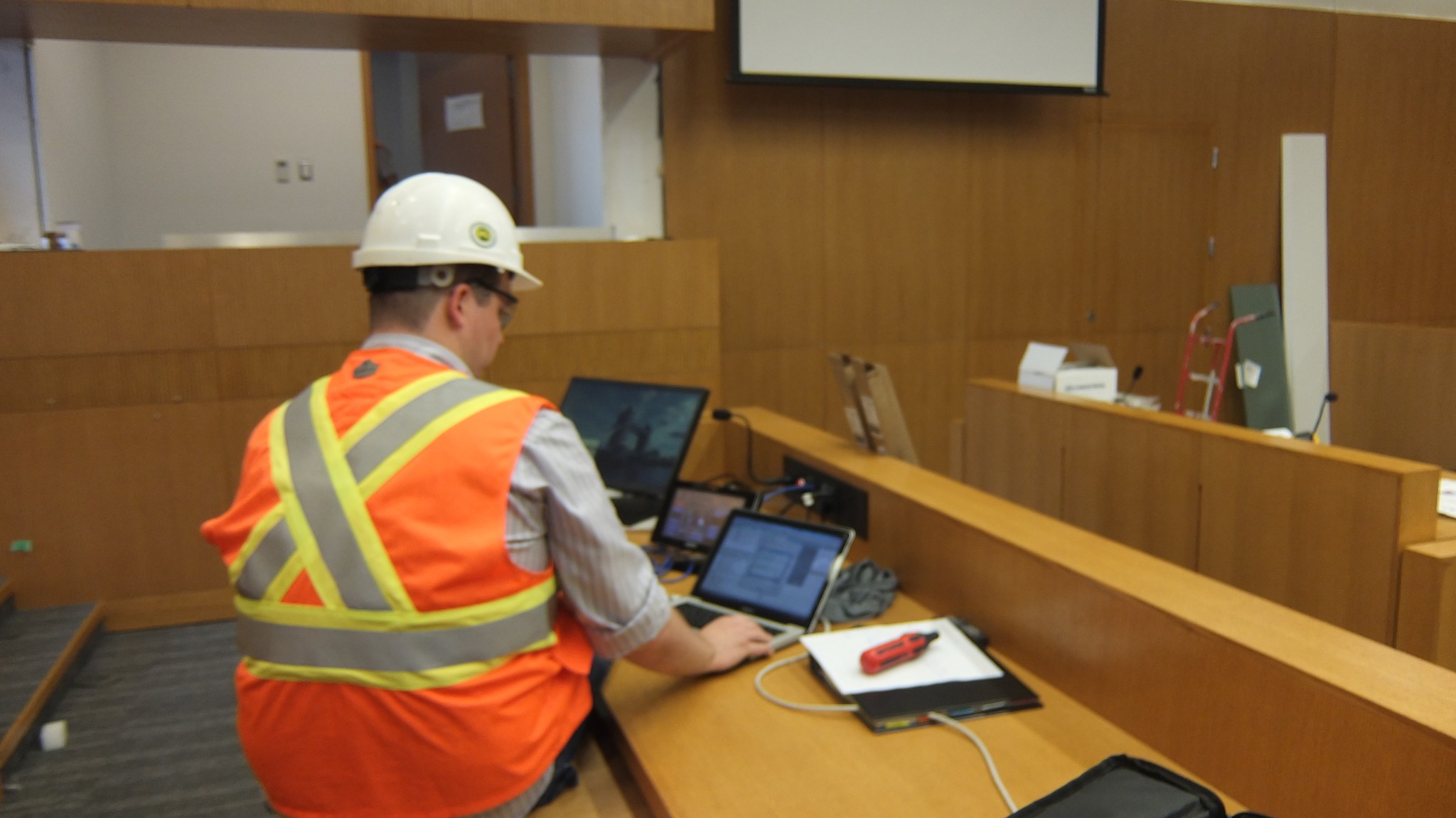 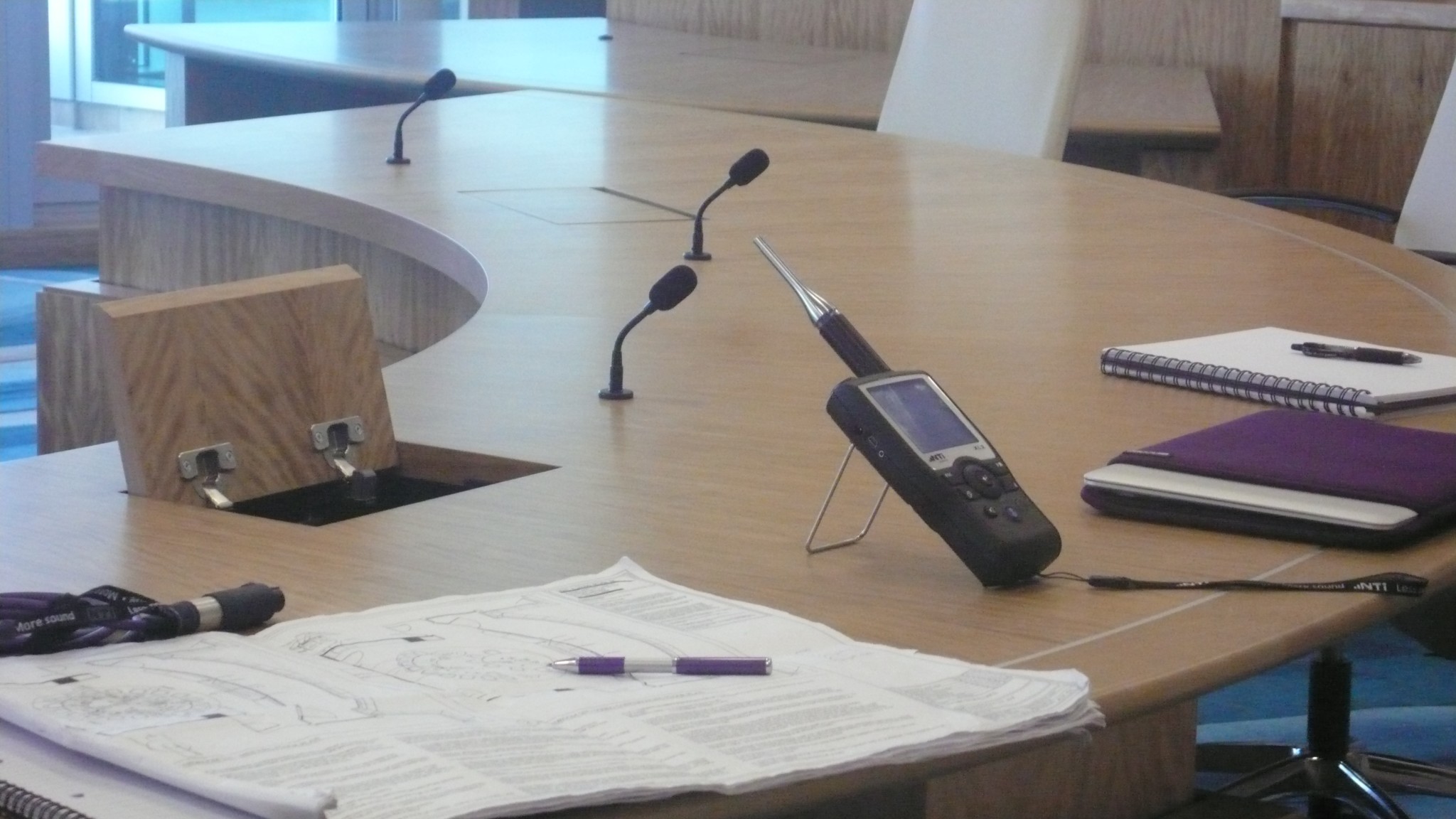 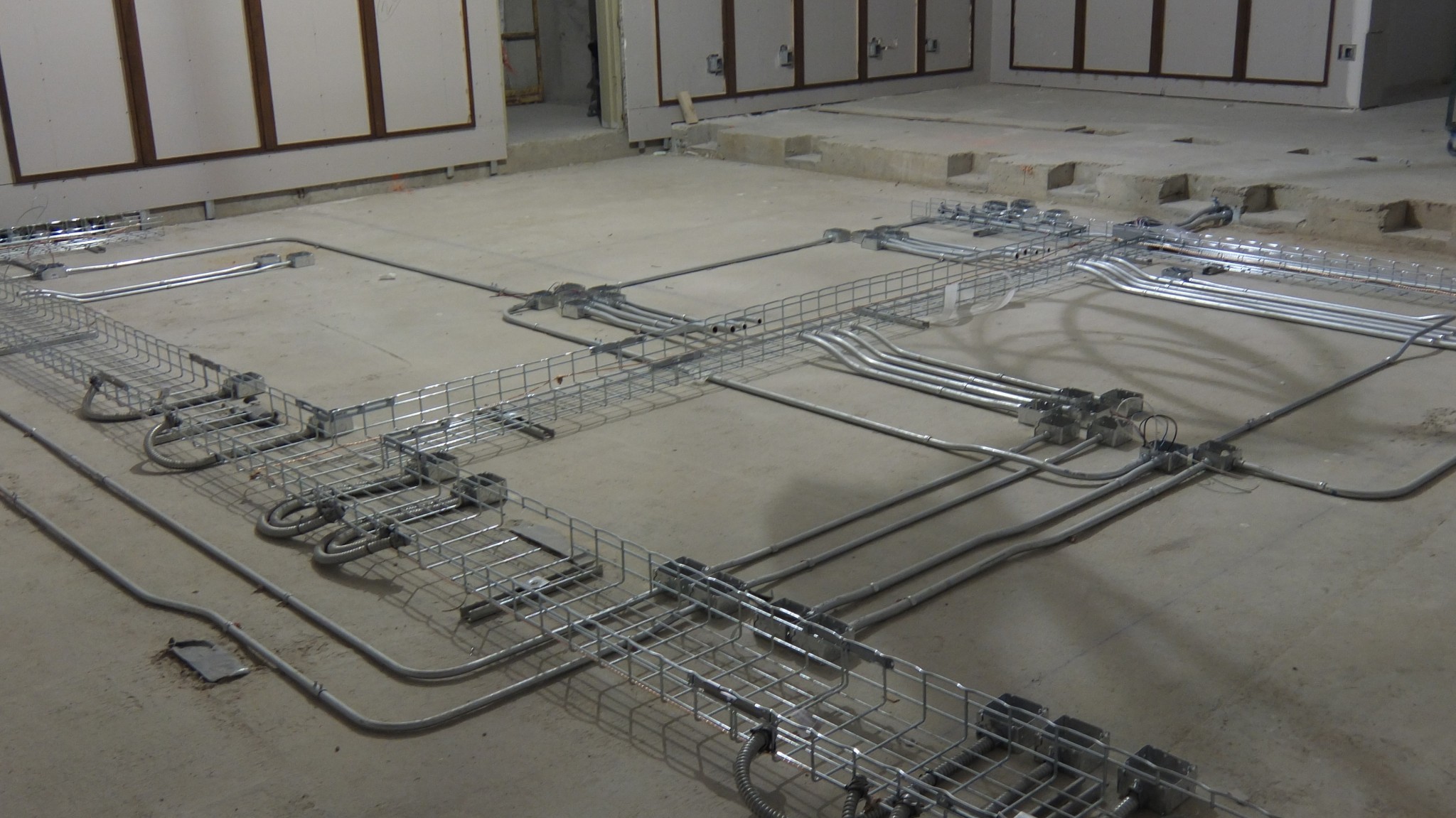 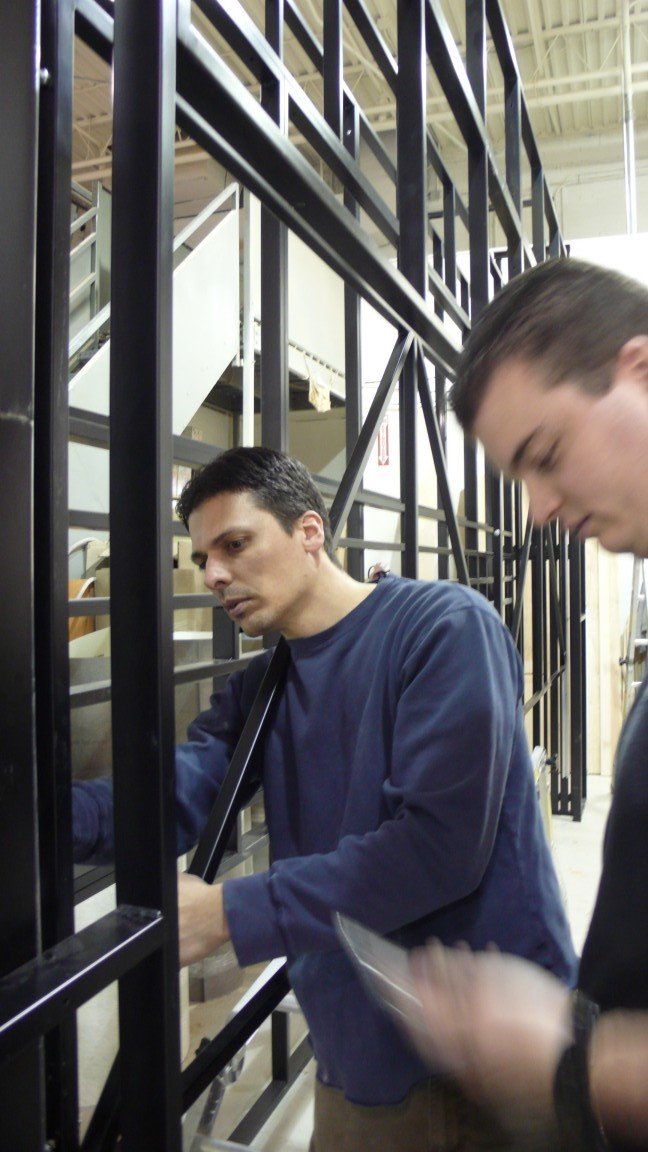 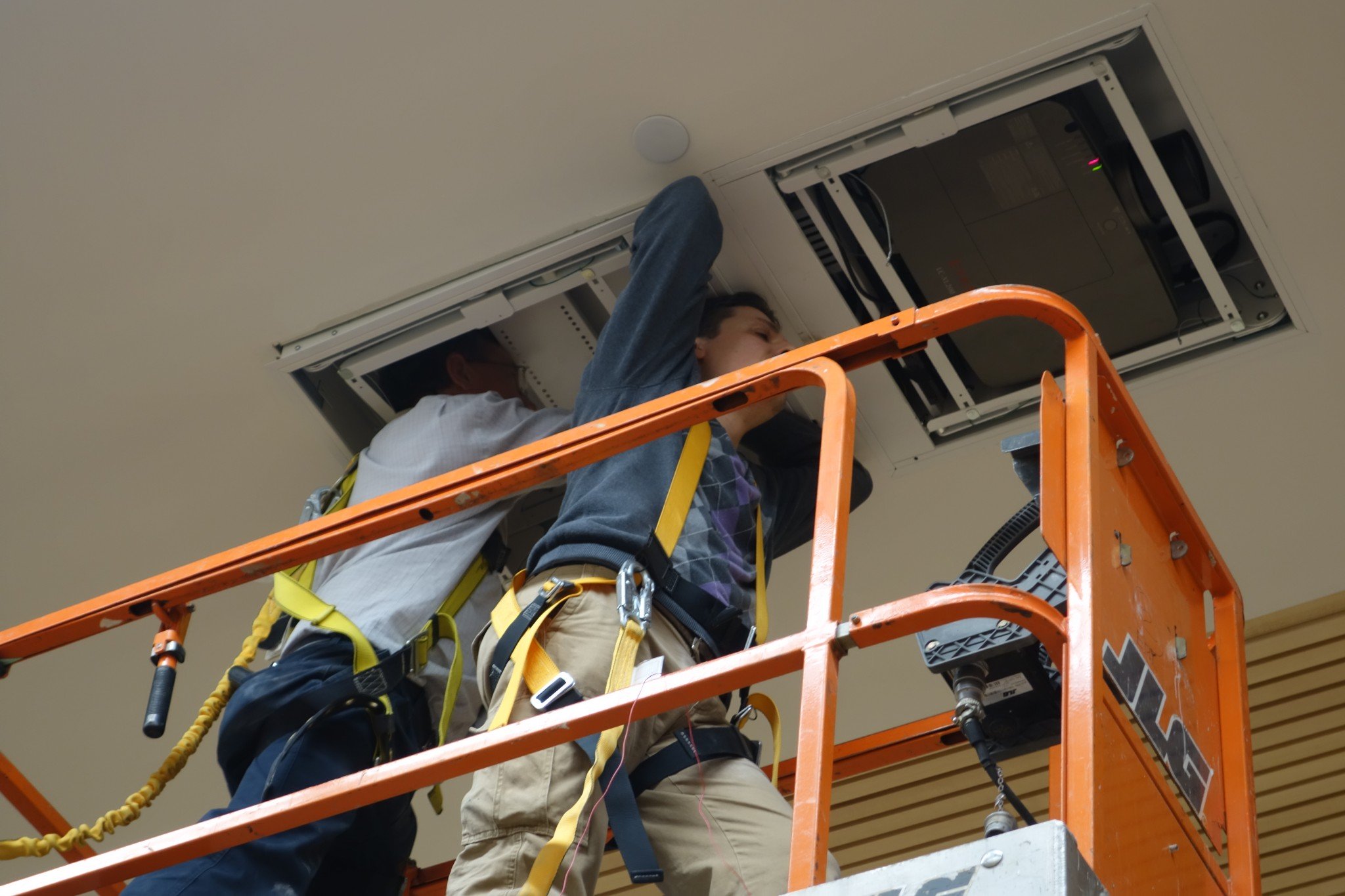 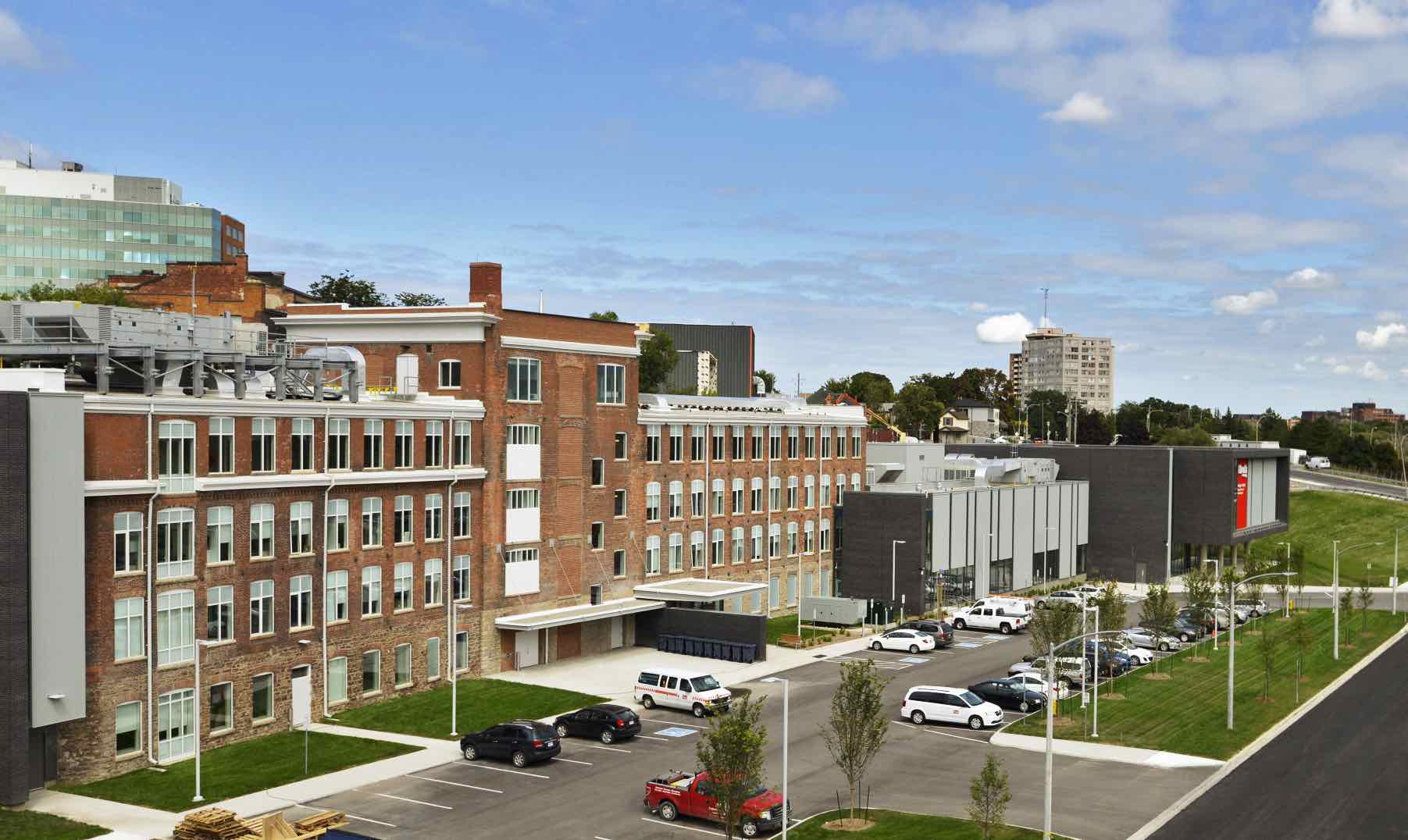 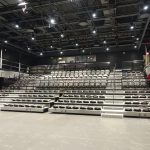 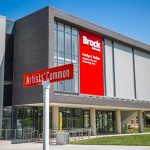 Work is nearing completion on the new Marilyn I. Walker School of Fine and Performing Arts. The building, a unique collaboration between Brock University and the City of St. Catharines, is expected to play a role in revitalizing and transforming downtown St. Catharines. AerialRendering

The structure, situated on the historic water raceway that powered an old factory, is separated from the City of St. Catharines’ First Ontario Performing Arts Complex (PAC) by a non-vehicular pedestrian zone.

The film theatre and Cairns Recital Hall within the new PAC will be used by the school for academic activities. Intended for both student and community use, the facilities are expected to create a municipal arts and culture hub.

“The relocation of the Walker School fulfills Brock’s mission of reaching out and engaging the community in direct and meaningful ways,” Derek Knight, the school’s director and Marilyn I. Walker chair in Creativity, Imagination and Innovation has said.

“Not only will our presence play a key role in helping revive the city’s downtown core, but also our long-term commitment to fine and performing arts education ensures a continuing and vital role in our interactions with community arts groups, including local theatre companies, art centres and orchestral, choral or musical groups.”

Scott Roper, Brock University’s project manager, campus planning, design and construction, said that the architect succeeded in understanding the university’s objectives to “inspire the creativity of students, faculty and staff with the unique site and spatial intrigue of this group of historic buildings and new additions.”

“The architects resolved a diverse and extensive range of academic requirements with an equally diverse and challenging set of existing buildings to give the initiative a distinctive place,” he said.

The former Canada Hair Cloth building on St. Paul St. and an adjacent warehouse have been rehabilitated for multi-purpose use by the departments of dramatic arts, music, visual arts and the Centre for Studies in Arts and Culture. The building will provide state-of-the-art production and workshop support, music practice facilities, art studios, lecture and seminar rooms as well as a versatile stand-alone 235-seat theatre for drama students.

“All of this had to be carefully fitted into buildings of various ages containing unique spatial conditions including narrow floor plates, a column line at 8 ft. centres, a warehouse and an industrial shed,” he said.

He says extensive study and several phases to envision the new academic concept by faculty resulted in the final design. “Music was assigned the oldest area with the heaviest masonry, dramatic arts to the warehouse, and visual arts studios were assigned to the top floor after the removal of the columns. The theatre was turned sideways and fitted between two existing buildings, minimizing the structure to be demolished and the new build required.”

AerialRenderingRoper says the small site and the series of narrow and linear buildings made it necessary for Bird to maintain tight control of the movement of construction personnel, equipment and material. “As in any building with features built and connected to one another in different decades, existing construction did not always follow predictable construction methods. This created some unanticipated conditions, all of which were dealt with by Diamond & Schmitt Architects and Bird Construction.”

Roper says there are four dramatic arts studios, two of which are intended for performance, along with the main theatre which offers “total versatility with respect to seating layout and lighting and scenes due to grid coverage of the entire space and a gantry for students to design and set up the space.”

Lewis says the Stage House (main theatre) and the two performance studios have been designated for high quality sound and video projection capabilities.

He says custom-manufactured acoustic panels are mounted into the walls to be flush so they are visible but not intrusive and an effort has been made to integrate cabling as much as possible. “Everything has been done with the overall design in mind. The acoustic panels have been manufactured in aluminum with high quality jacks and systems both for quality and design.”

He says the studio has been equipped with equipment boards and the audio reproduction to play back pre-recorded sounds. High quality and distinct loud speakers will perform differently and serve different functions.

In addition to the main studios, Lewis says peripheral areas have been connected to allow paging into the surrounding areas, and capability built into the green room and dressing rooms will allow players to watch the on-stage performances to watch for cues. “The cabling system is extensive for maximum flexibility. Just about every cable lands on a patch for rerouting so there are several hundred patches in all which will give the students flexibility to simulate everything they need.”

To create the high quality, noise-free sound required for the theatre environment, Lewis says extra precautions were taken to isolate all of the wires from the equipment racks. Great power capability he says has been achieved through high wattage amplifiers.

Knight says the project will have a significant impact on the university’s academic programs in dramatic arts, music, visual arts and its Centre in Studies in Arts and Culture. “It places Brock’s Marilyn I. Walker School of Fine and Performing Arts amongst the most competitive of university programs in the country. New facilities mean exceptional opportunities for faculty and students alike.”

He says the investment represents “a long-term commitment to a generation or more of aspiring artists, performers and musicians; the cultural renaissance that this signifies is also key to the revival of the downtown core of the City of St. Catharines.”

“This is a well-built, beautiful teaching facility. We are proud to have been involved in helping create the real-world environment the students will enjoy,” says Lewis.

Roper calls this a unique and remarkable project for the university. “It is a leading edge demonstration of what can be done to revitalize old buildings. The excitement of bringing the building project to successful completion is only the first step in what will be an extraordinary new learning environment for students and enrichment of the downtown arts environment, all of which will be fully realized in just a few months.”

The project has been funded in part through the provincial government’s Open Ontario program with a $15 million contribution from Canadian fibre artist Marilyn I. Walker. Substantial completion was achieved in May. After fit-ups and occupation by staff and faculty in June, the building will be ready for classes in September.

As published in the "GTA Construction Report"

Article can be found here. 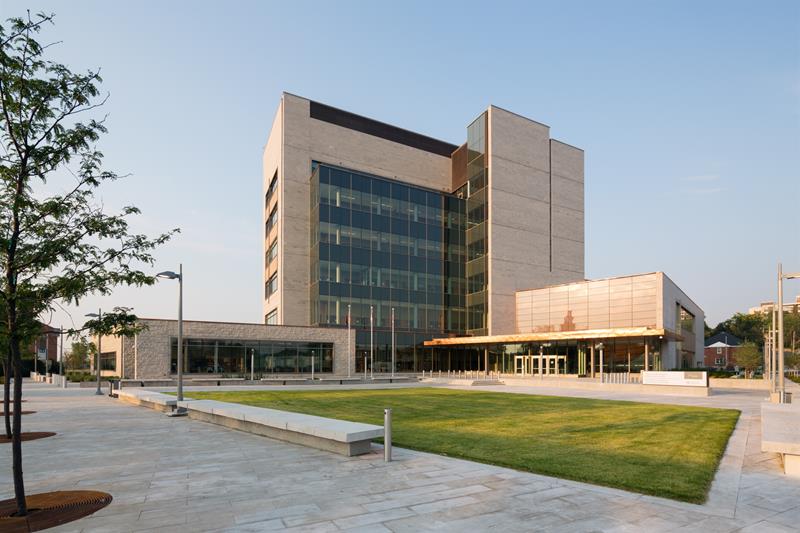 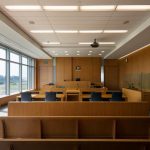 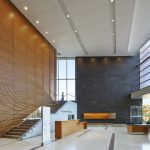 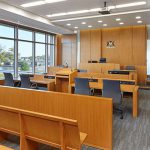 The new $247 million Quinte consolidated courthouse in Belleville replaces four Ontario and superior courts, offering improved security and accessibility, and is expected to be a catalyst for the community’s downtown revitalization. The 173,000 sq. ft. project is one of five Infrastructure Ontario (IO) projects for the Ministry of the Attorney General, constructed under the public-private alternative financing and procurement model. “The courthouse has been designed to adapt to a changing justice landscape impacted by population growth, new legislation and new technologies, says Angelo Gismondi, IO’s vice-president of project delivery. The building “can be modified to accommodate changing caseload volumes and the latest court technology.” Gismondi says the consolidation brings together Ontario Court of Justice and Superior Court of Justice functions, Crown attorney offices, courts administration and victim/witness services offices. “A single address for court matters will help to reduce delays in the court system and increase access to justice.” “Within . . . interior spaces, materials such as limestone, rift cut oak and terrazzo will help create an environment reflective of the dignity and stature of the courthouse,” he said. “The exterior of the courtroom block is clad mostly in limestone and brick.” Public spaces and open office areas requiring natural daylight are located along the outside walls. As well, several courtrooms will have access to direct exterior views, making the building open and airy. Accessibility features include enhanced interpretation resources. One room is permanently equipped and three portable units can be used where they are required. The building also has infrared for the hearing impaired. “The courthouse is fully barrier-free to accommodate users with physical disabilities in the public area, the courtroom well, the witness box and the court clerk and reporter desk,” Gismondi said. “Nine of the 11 courtrooms will have a barrier-free dais, and all jury boxes will have one barrier-free seating position to accommodate wheelchairs and other mobility devices.” Camera systems throughout the building provide increased security. Distinctive built-in security systems accommodate the different visitors and users of the courthouse as public, accused, judges and staff all have their own requirements. Gismondi says all of the five new courthouses, which have been designed to achieve LEED Silver certifications, reflect the Ministry of the Attorney General’s design principles including dignity, functionality, value, durability, flexibility, accessibility, security, independence, context, environment and clarity. “There was not necessarily a specific design to be followed for all but certainly a specific interpretation and characteristics to be reflected in the design of all five of the courthouses,” he said. The project is built through the Brookfield Partnerships consortium, including Brookfield Financial Corporation, Morguard Corporation, PCL Constructors and WZMH Architects. “Brookfield Infrastructure Partnerships Quinte assembled its construction team and it included a large number of local companies and workers,” says Gismondi. “More than 80 per cent of the construction team was made up of local workers and included the carpet supplier, masonry and exterior stone work, drywall, and roofing and flashing.” At its peak, the Quinte project had more than 200 workers on site and is expected to host 500 staff and visitors daily when it opens. The site’s location is intended to act as a catalyst for Belleville’s downtown, with restaurants and shops potentially opening to support additional pedestrian traffic. The courthouse, sited cross from the Moira River feeding into Lake Ontario and with a beautifully landscaped
civic plaza in front, “is a world-class facility that will become a cornerstone civic building and make a significant contribution to the revitalization of Belleville’s downtown core,” Gismondi said. Construction is almost complete. In May 2013 the International Union of Elevator Contractors began a province-wide strike and, although elevators had been installed, work to license and operate the units stalled. “As soon as the elevator constructors are back at work PCL will seek to obtain the occupancy permit,” says Gismondi. “We are currently anticipating the Ministry of the Attorney General will be able to move into the courthouse in late summer.”

Sight N Sound Design, a design build audio-visual (AV) consultant, installed the Quinte courthouse’s AV systems, including evidence presentation, voice enhancement, audio recording, video conferencing, remote testimony facilities, and control systems. Sight N Sound president Ken Lewis says his company specializes in complex projects, including the recently completed Waterloo courthouse. “One element that is unique to these courthouses is the integration of legacy video and the new digital format into courtroom evidence presentation systems,” he said. While work on Quinte is essentially a scaleddown version of the Waterloo project (Waterloo has 30 courtrooms while Quinte has 11), Quinte’s integrated AV technology panels have been enhanced. “We completed the design for these between the two projects,” says Lewis. “While the previous design was sleek, this model increases available desk spaces for both the witness boxes and counsel tables where they will be used.” The new panels contain legacy and digital capabilities, data jacks, AC power and microphones, fit in the upper part of the desks and are connected by whip cables so are easy for maintenance staff to remove as required. Quinte will be the first court to use the new design. “Everything we installed is state-of-the-art but each component was designed as the technical solution for a particular situation. Every capability meets a judicial need so it is all very efficient.” Once the courthouse opens, Sight N Sound Design’s role changes, but the company’s AV experts will remain on site, reflecting the ongoing commitments in P3 projects.. 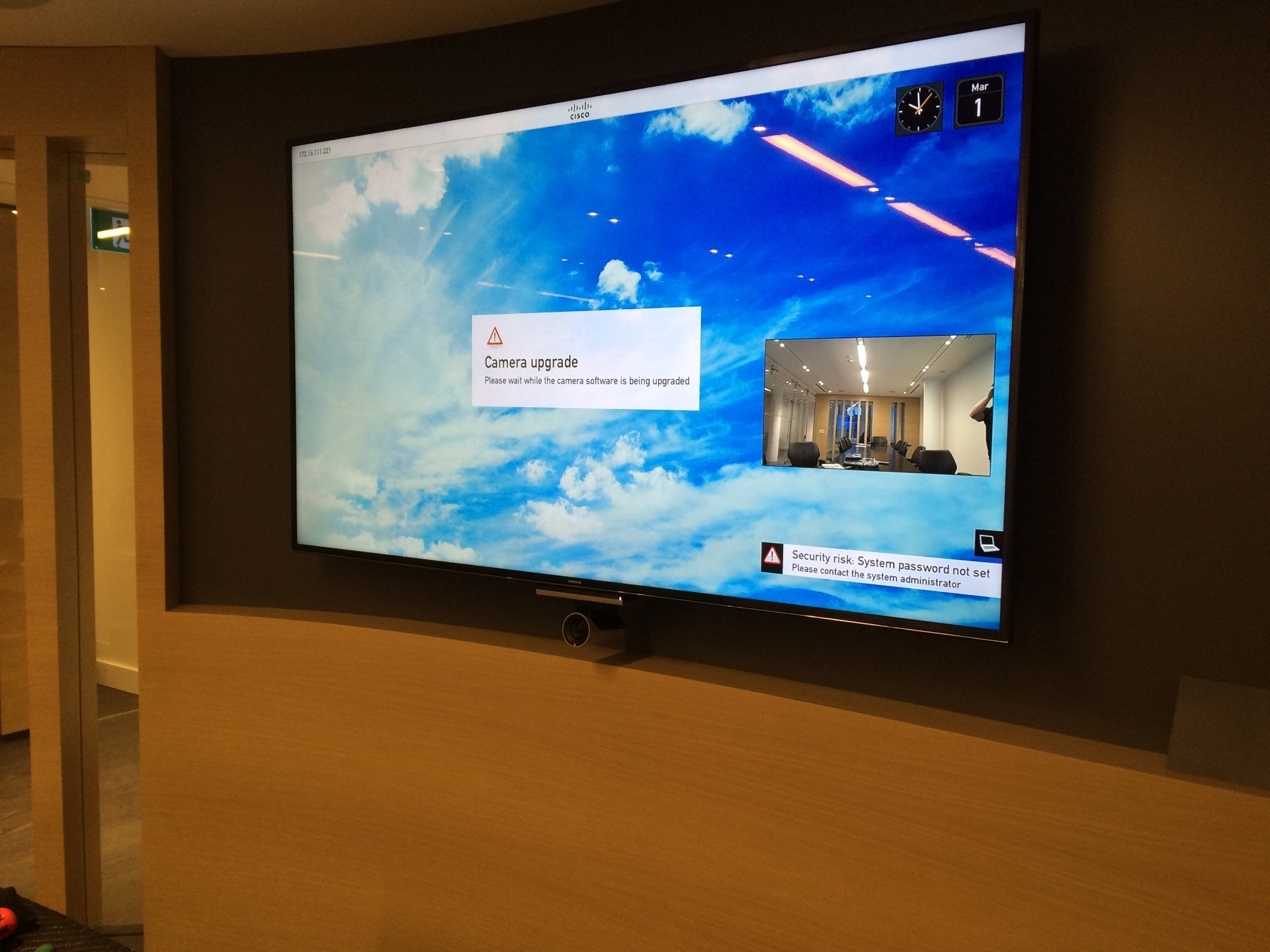 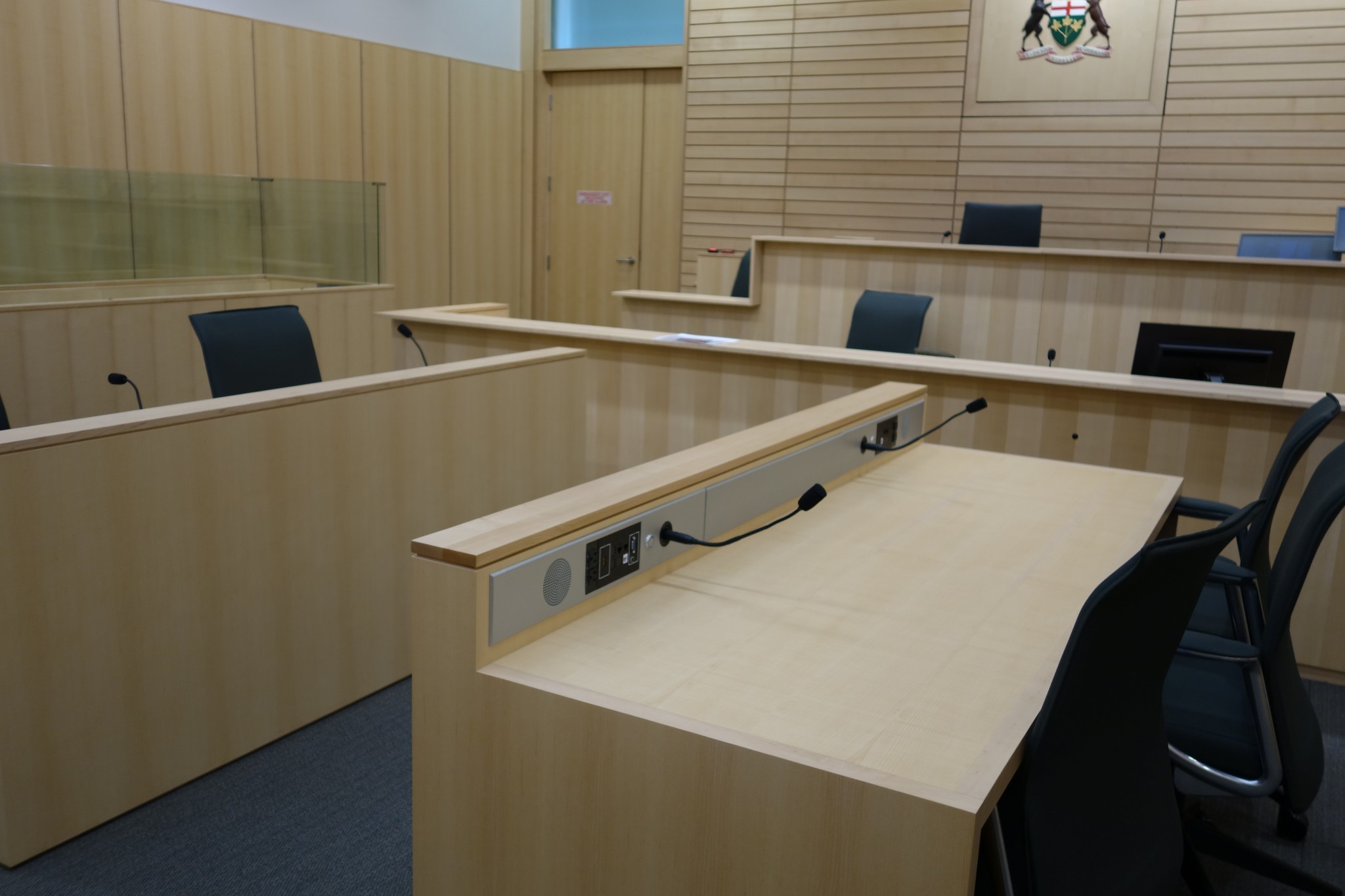 Read more about this project here.